Bentley was a gender-bending performer during the Harlem Renaissance whose stage name was Bobbie Minton.
While growing up, Bentle 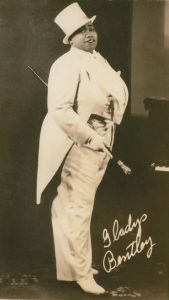 y preferred wearing their brother’s suits rather than dresses and blouses. Bentley stated in an
Ebony magazine interview: “It seems I was born different. At least, I always thought I was.” Bentley was teased by their
peers and ostracized by their family and ran away at the age 16. Bentley was known as “American’s Greatest Sepia Piano Player” and the “Brown Bomber of Sophisticated Songs.”
The New York Times said Bentley was “among the best-known
black entertainers in the United States” in the 1930s.

Bentley defied the law and publicly married a white woman during a civil ceremony in 1931. The McCarren Act that passed
in 1950 prompted a witch hunt for suspected communists as well as members of the LGBTQ community. Bentley was forced to conform at the whims of McCarthyism and the Black Church and later in their life took female hormones, married two different men and proclaimed in Ebony Magazine: “I am a woman, again!” While society ultimately did not accept Bentley’s gender-nonconformity, they were truly a pioneer who lived as their authentic self for many years at a time when the word “transgender” did not yet exist.